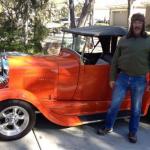 James Arthur Butler III, known as Jim, a longtime machinist at the Lab, died Nov. 17. He was 66.

Butler was born in Oakland on July 25, 1954 to Kathleen and James Arthur Butler II. He was raised in Fremont and attended Chabot College. He joined Lawrence Livermore Lab in 1981, and graduated from LLNL’s machinist apprenticeship program in 1985.

Throughout his 34-year career he specialized in laser processing, retiring in 2015. Throughout his life he enjoyed classic cars as well as drag racing. He spent much of his retirement working on his own cars and attending classic car shows. He also loved spending time with his family, particularly his grandchildren. He volunteered as a scout leader, and coached Little league baseball and softball. He always was supportive of organizations that helped children and veterans.

Jim and his wife, Ann, married in 1982. He is survived by his wife, his son, Jonathan (who works in MED Additive Manufacturing and Laser Processing), his daughter Katie, his brother Will Butler, his sister Arleen Krieg and his five grandchildren, LilliAnn, Joshua, Josephine, Lacey and Liam.