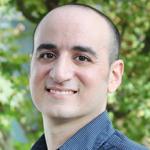 Hormozd Gahvari of Livermore died Oct. 3, after a long and courageous battle against Ewing’s Sarcoma. He was 34.

He first came to Lawrence Livermore National Laboratory (LLNL) in the summer of 2010 as a summer intern and returned again in 2011 and 2012. He immediately stood out, because he was a brilliant computer scientist, who was able to quickly master new research topics, form bridges between disciplines and come up with creative solutions to difficult problems. He's also remembered for his outgoing, cheerful personality. Besides delivering excellent research results, he also organized social activities.   In 2014, Hormozd was selected as the first Sidney Fernbach Postdoctoral Fellow in the Center for Applied Scientific Computing at LLNL, a position he started with a lot of energy and ambition.

Hormozd’s hobbies included running, weightlifting, backgammon, photography and following his favorite sport teams. He was particularly devoted to the University of Illinois basketball and football teams, as well as the Chicago Cubs, Bears, and Bulls.

Hormozd showed great courage and perseverance during his illness. He always kept up a hopeful, cheerful attitude, and never stopped looking for and finding the positive in every situation. He was an inspiration to all who knew him.

Hormozd is survived by his wife Ashley; his daughter Shayda; his parents, Professor Firouz and Nasrin Gahvari of Champaign, Illinois, and his brother Dr. Zhubin Gahvari of Madison, Wisconsin.

Contributions in his memory may be made to the Carson Sarcoma Foundation on the web.