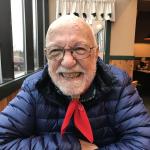 Stratton was born Nov. 13, 1929, in Eugene, Oregon, the only child of Thelma and Ralph Stratton. His father, a merchant marine and mechanical engineer, moved the family frequently, settling on the naval base in Bremerton, Washington, where Stratton graduated from high school in 1947. In 1952, he graduated from Washington State University.

In 1952, he married Nancy Sullivan and they moved to Davis, where he worked as a bacteriologist at the University of California, until he joined the U.S. Armed Forces. While in the Army, he was stationed at Fort Ord, Fitzsimmons Army Hospital in Denver, Brooks Army Medical Center in San Antonio, the U.S. Army Hospital in Landstuhl, Germany, and the 10th Field Hospital in Wurzburg, Germany. After the service, he and Nancy settled in Livermore, where he worked at Lawrence Livermore Laboratory and Nancy raised their only child, Gillian Margaret.

Although he was a scientist by profession, he was also interested in the arts and was an accomplished woodworker, painter, sculptor, boat builder, actor and theater set designer. He was a founding member of the regional theater group Cask and Mask and the So Happy Its Thursday Sailors club, both in Livermore.

In 1975, he married Jacqueline J. Haaheim, acquiring three more children – Kip, Jil, and Debra. He was a devoted husband, father and grandfather.

In addition to his children, he leaves his grandchildren (Preston, Joe, Jenny, Jodi, Shauna, Ryan, and Lissy), several beloved cousins, a handful of friends, and many others whose company he truly enjoyed. Due to COVID-19, memorial services will be delayed until the summer when people will have a safer and easier time traveling.