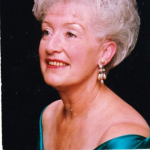 Froberg was born in Cedar, Minnesota, and moved with her husband Robert Miller to Spokane, Washington in 1952.  Later, she and her family relocated to Pleasanton in 1969.  She was hired at Lawrence Livermore National Laboratory in 1974, retiring in 1989.  She worked most of her years as an administrator in the Director’s office.  She also enjoyed the position as a broadcast announcer on the local lab television channel.

She was preceded in death by daughter Kristine Miller, and second husband, Ken Froberg.  She is survived by daughter Kathryn Disch, son-in-law Dan, and granddaughter Stephanie Disch.

Donations can be made to the Alzheimer’s Association.