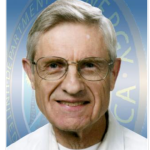 Mackie was born in Madison, Wisconsin on Aug. 20, 1940. After graduating from Madison High School in 1958, he served as a lieutenant in the U.S. Navy, where he applied to be in the nuclear power program.  Normally this would mean that after nuclear power training he would be assigned to a nuclear-powered submarine or surface ship. After being interviewed by Admiral Hyman Rickover, the man who founded and headed the Navy nuclear power program, he was assigned to work in the Office of Naval Reactors. Working directly for the Admiral, he did his duty and at the end of his service, left the Navy for graduate school to study astrophysics. He completed a Ph.D. at the University of Illinois where he completed a dissertation entitled "Black Holes: Where Stars Go to Die."

His important contributions to understanding South Asia began when he started his career as an intelligence professional at Lawrence Livermore National Laboratory in 1978 continued even after his retirement from in 2007 when he returned on a part-time basis from 2007-2016. He contributed to a wide range of assessments of national and international importance, bringing his technical expertise and insatiable curiosity to his work. He mentored many current and former LLNL intelligence analysts, helped to build a legacy of excellence in analysis, and fundamentally influenced several critical initiatives in U.S. foreign policy. In recognition of this career achievements, he received an Exceptional Achievement Award from the Secretary of the Department of Energy (DOE).

He is survived by his wife, Mary Mackie, his stepdaughter, Tammy Taylor, his daughter, Margaret Hanke, and his granddaughter, Geena Hanke.

A memorial will be held Sunday, July 17 at 2 p.m. at First Presbyterian Church of San Leandro, 180 Estudillo Avenue, San Leandro. Note: The church is adhering to Covid-19 precautions.  If you plan to attend, please provide proof of vaccination or proof of a negative Covid-19 test within the prior 24 hours. All attendees must wear a mask.