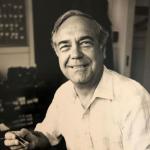 Cigliuti was born and raised in a home on First Street in downtown Livermore. Growing up, he enjoyed all that Livermore had to offer: playing on the 1941-45 Livermore High School Cowboys football team; calf roping at Livermore’s annual rodeo; and playing the trumpet in high school, and for many years afterward in a band that performed throughout the San Francisco Bay Area.

He enlisted in the U.S. Navy, and was sent to San Diego for basic training. There he met a young Navy nurse, Patricia Ann Korander; they were married for 64 years. After leaving the Navy, they began their life in Livermore, raising three daughters. He worked as a locksmith at Lawrence Livermore National Laboratory for 35 years. He was active in St. Michael’s Catholic Church and school. He built radio-controlled airplanes, was an active bowler and traveled extensively with the Seniors in Retirement (SIRs).

He is survived by his daughters, Margaret (Richard) Walsh; Ann Cigliuti; and Lisa (Bryan) Corcoran, along with five grandchildren and nine great-grandchildren. His wife, Patricia, preceded him in death.