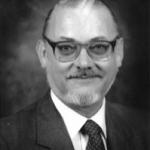 McClure was born in Carson, North Dakota on Dec. 31, 1933 to the late Edwin Laub Sr. and Rose Magdeline McClure (Anderson). He received his doctor of science in mechanical engineering at the University of California, Berkeley in 1967.

He had a long career at Lawrence Livermore National  Laboratory, where he rose to the deputy head of the mechanical engineering department, division leader of the energy systems division and program leader of the precision engineering program, which proposed and oversaw the development of the Large Optics Diamond Turning Machine (LODTM). He retired from LLNL in 1988 and joined the Moore Special Tool Company as vice president for engineering and technical director. He retired from Moore in 1996.

A significant contributor to his field, McClure has been recognized for his efforts to define the field of precision engineering, his leadership in the creation of the American Society for Precision Engineering (ASPE) and his technical contributions in the area of thermal effects on manufacturing accuracy, for which he received the lifetime achievement award. McCLure has been a passionate spokesman for precision engineering and his technical and organizational skills have had a profound impact on the field and those involved in it.

A memorial service will be held on Nov. 23 at 12-noon at Unitarian Universalist Church, Livermore, reception will be held after the service.