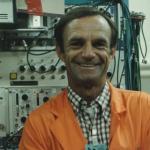 Worden was on the team that observed the spectra and found the first energy levels in the elements curium, berkelium, californium and einsteinium. In 1985, he received the Louis A. Strait award for outstanding accomplishments in the areas of molecular absorption spectroscopy, atomic emission spectroscopy and laser spectroscopy, at the Pacific Conference on Chemistry and Spectroscopy. He authored numerous publications, co-authored books on spectroscopy and was granted several patents. Earl was a member of the Society of the Sigma Xi, Phi Kappa Phi and Alpha Chi Sigma.

He is survived by his wife of 59 years, Marlys; his son Seth; sisters Joyce Richardson and Gayl Worden; and brother Dean Worden.

Donations in his memory can be made to Save Mount Diablo, or a charity of your choice.