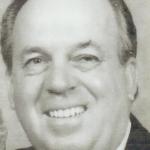 Garcia was born Oct. 16, 1930 to a Pleasanton heritage family (Frager) dating back to the mid-1800s. He graduated from Pleasanton Elementary School in 1945 and Amador Valley High School in 1949. He enlisted in the U.S. Air Force in 1951 and was honorably discharged four years later. Garcia married Lillian M. Perez on Feb. 18, 1956. In 1960 they settled in Tracy and raised three sons, Steven, Michael and Ronald.

Garcia was employed at Lawrence Livermore National Laboratory from 1960-1993. He was assigned to the Lab’s Site 300 facility for six years, then transferred to the Livermore main site.

Garcia was preceded in death by his wife Lillian; parents William and Myrtle Garcia; son Ronald Edward Garcia; and sisters Dorlene Alves and JoAnn Holden. He is survived by his sons Steven Sr. and Michael Garcia; daughters-in-law Catherine and Cathy Garcia; grandchildren Amber, Ashley, Steven Jr., Garin and Gianna Garcia; and many nieces and nephews and great-grandchildren.