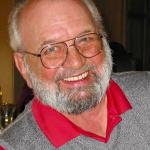 Moon was born in Herrick, Illinois, he was the second son and youngest child of J. Burl Moon and Joanna (Turner) Moon. He went on to major in mechanical engineering at the University of Illinois in Urbana. His superior performance was rewarded by membership in the University Honor Society and Engineering societies.

In 1956, he met his future wife Joan, and they were married in June 1958, settling in Detroit where he worked for General Motor. In 1961, he was ready to return to academia. He earned his Ph.D. in material sciences at Caltech in Pasadena in 1966 and was then hired by UC Davis to help develop its Mechanical Engineering Department. In 1972, he moved the family to Walnut Creek when he left UC Davis for employment with Lawrence Livermore Laboratory, where he remained until his retirement in 1994.

He is preceded in death by his parents and his brother James Moon. He is survived by his daughter Anita Moon-Grady (Daniel); son David Moon (JiAe (Kim)); five grandchildren, Siobhan (Sophia) and Jamie Grady, and Samantha, Melissa and Rebecca Moon and two nephews.

A celebration of life will be held on June 19, 2022, at Poppy Ridge Golf Course. All are welcome, but please contact the family for details if interested in attending (amoongrady [at] gmail.com).

In lieu of flowers, please consider a donation to St. Jude Children's Research Hospital or the Fetal Heart Society.