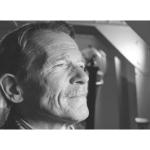 Ryder was born in Oakland, California and grew up in Castro Valley. He survived polio at age 13 and spent a year in an iron lung and though he had lost most of the muscles in his hands, became quite the artist. He moved to Livermore with his wife Joyce where he was hired as a technical illustrator at Lawrence Livermore National Laboratory where he worked for 25 years. He and Joyce raised three kids, Jason, Erin, and Megan. During that time, returned to college got his management degree from Saint Mary’s college and taught college classes in illustration at Chabot Community College, all while working full time.

He became involved in air racing and started the National Air Racing Group (NAG) with a group of like-minded passionate people, a group which eventually had around 10,000 members worldwide. He continued to up the game to larger shows which in addition to producing or directing, he also became a sought-after professional announcer. Through the ‘80s and ‘90s, his voice became known at some of the most important airshows in the nation, and as a promoter and director he was known and respected by some of the most heroic warbird, aerobatic and combat veteran pilots around.

He was an involved grandfather to two granddaughters, Annalyse and Madi and he and Joyce fostered 40 children, adopting their last child, Chelsea.

He is survived by his wife, Joyce, his kids, Jason, Erin, Megan and Chelsea. There are plans to come together for a family celebration of life in the Monterey area where he last resided.