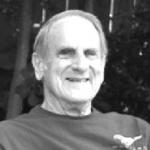 Gerigk was born on May 10, 1934 in San Francisco to August and Clarice Gerigk. He graduated from Lick Wilmerding High School in 1952 and received a bachelor's degree in mechanical engineering from California Polytechnic University at San Luis Obispo and a master's degree from Arizona State University. While a student at Cal Poly, he met his future wife, Maureen. They moved to Livermore in 1957 where Gerigk began his career with Lawrence Livermore Lab. He was an active member of St Michael's Catholic Church and was a past president of the Society of St. Vincent de Paul of Alameda County.

He is survived by his children, Jeanette, Catherine (Alan) and Steven (Jaime); his grandchildren, Travis, Christopher, Alexa, Jacob, Nicolette, Matthew and Hailey; and his partner, Jo Woodel. In addition to his parents he is preceded in death by his wife Maureen, daughter Therese, brother Bernard and sister Bernice Cavallini.

A celebration of life will be held at a later date once restrictions on gatherings are lifted.