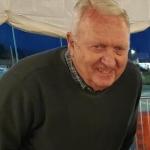 Mapes was born in Hollywood, California and grew up in the Los Angeles area.  The son of Ted and Ruth Mapes, he graduated from John H. Francis Polytechnical High School before attending San Jose State University.  In 1964, one month after graduating with a degree in geology, he joined the U.S. Navy as an aviation officer.  He would serve his country for eight years. After service he went on to complete his master’s degree in civil engineering from San Jose State University while working at Lawrence Livermore Laboratory.  He would retire from the Lab after 30 years of employment.

He is survived by his wife, Donna, son John, son Jeff, daughter-in-law Joanne, daughter-in-law Trina, four grandchildren Tyler, Rachel, Ellie and Abri, and several nephews and nieces.  He was preceded in death by his sister Marilyn Ils.

There will be a celebration of life service on Friday, June 24 at noon. The service will be held at Callaghan Mortuary, 3833 East Avenue in Livermore.  In lieu of flowers the family has requested for donations to be made in Dennis Mapes’ name to Granada Little League, PO Box 665, Livermore CA  94550.

Callaghan Mortuary is honored to be serving the Mapes family.  An online guestbook is available for condolences at callaghanmortuary.com.