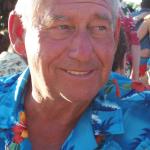 Wilson was born in Port Heron, Michigan to Morris Wilson and Norma (Smith) Wilson. He had one sister, Valerie Lee (Wilson) Worden, who preceded him in death. He joined the U.S.  Marine Corps in 1958. While stationed in Japan, he met his wife, Hatsue Narita. He left the Marines in 1967 and joined the Coast Guard, where he retired after 20 years. During his military career, he received numerous awards and medals including the Vietnam Service Medal, Vietnam Campaign Medal, National Defense Medal, Meritorious Mast and Rifle and Pistol Expert Badges.

After retiring from the Coast Guard, he was hired as an electronics technician at Lawrence Livermore National Laboratory. He worked on numerous projects including the Mirror Fusion Test Facility. During his tenure, he earned a master’s degree in Human Resources and Organization Development from the University of San Francisco in 1986. He retired in February 2001. After retirement from the Lab, he obtained his Realtor license.  Over the years, Dennis worked for RE/MAX and Keller Williams. He officially retired for the third time in 2018.

Wilson lost his first wife (Hatsue) to cancer in 1993. He met his second wife, Phyllis Andrews Wilson, in late 1993. He and Phyllis married in 2014.  He is preceded in death by his daughter, Cinnamon Lee Wilson. He is survived by his wife Phyllis, of Brentwood, son, Jerry D. Wilson, of Salida (Jennifer); stepdaughter, Ronda Green (Rich), of Livermore; granddaughter, Ashley Maher (Jason) and great-granddaughter, Violet Rose Maher, of San Diego; and grandson, Nicholas Green, of Woodland.

Funeral services will be held at 10:30 a.m. on Oct. 2 at Fry Memorial Chapel in Tracy. Viewing at 9 a.m. He will be laid to rest at Tracy Public Cemetery District. Due to COVID-19 social distancing and masks will be required.

In lieu of flowers, please make donations to the American Parkinson’s Association or the Lewy Body Dementia Association.