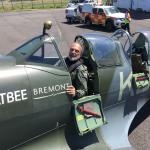 After retiring from LLNL, he continued to work on laser fusion topics, and was a co-inventor of StarDriver, a new concept for commercial-scale laser-driven energy production. In 2001, he founded Eimex to provide computer modeling and consulting services in laser science, as well as expert witness testimony for laser injury and patent litigation. He published widely and held numerous laser-related patents.

Eimerl had a wide variety of passions. He was a classical and jazz pianist, singer and composer. He also played the bass guitar and, in his earlier years, performed with a rock band in England. He was a longtime member of a cappella groups, and performed for more than three decades, including once with the San Francisco Opera. A master scuba diver and avid hiker, he had a deep appreciation for the natural world. He loved long hikes and climbing the mountains in the Sierra Nevadas and Yosemite.

He served as a board member for The Solano Land Trust and the Green Valley Landowners Association. He was an accomplished horseman, and loved endurance rides on his horse, Rab. He also had a passion for aviation and spent hundreds of hours piloting small aircraft and performing acrobatics.

He is survived by his wife, Carol; daughter and son-in-law, Alyson and Kyle Charlet, and their children, Taylor and Dylan; son and daughter-in-law, Adrian and Lyndi Eimerl, and their children, Avery, Parke, and Peyton; son, Robert Eimerl; daughter, Elia Lundgren; sister and brother-in-law, Ann and Geoff Phillips; nephew, Simon Phillips and wife, Fedi, and their daughters, Carolina and Sofia; niece, Sarah Nixon-Teecey and husband, Adam, and their son, Elliott.

A celebration of life will be held at his home in Green Valley when it is safe for all to gather. Contributions in Eimerl’s memory can be sent to Solano Land Trust, 700 Main St. #210, Suisun City, California, 94585; Green Valley Landowners Association, 4160 Suisun Valley Road E240, Fairfield, California, 94534; or any charity of your choice.

Remembrances may be sent to his wife at
clundgren5 [at] aol.com