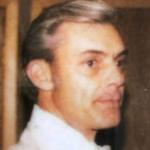 Mentzer was born in Schuyler, Nebraska, on April 20, 1934, to T.R. (Bill) and Helen Mentzer. After high school he joined the U.S. Navy and served as a radar man aboard the Aircraft Carrier USS Ticonderoga during the Korean War. With two years of service aboard ship, he was honorably discharged and returned to Schuyler where he married Norma Jean Honcik. He worked at Hormel Meat Packing Plant for a few years then as a Fremont firefighter. He was also an independent contractor and worked for many years with Elmer Gitt Painting. He retired from public service as a firefighter in Fremont, Nebraska, whereby they moved to Fremont, California, where he spent a second career of 19 years as an industrial painter and coatings specialist at the Lawrence Livermore Nuclear Lab.

He is survived by his two sons, Bill (Twyla) of Fremont and Kevin of Pasadena, California; grandsons, Nicholas and Nathan of Granby, Colorado; sister, Diane (Harris) Harvey of Brunswick, Georgia; and many nieces and nephews.