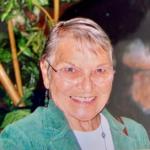 Althouse was born on Feb. 18, 1935 in Sparta, Wisconsin. She worked at Lawrence Livermore National Laboratory for more than 25 years as an administrative secretary for K and E Division and the Director’s Office. During retirement she volunteered and traveled for the American Red Cross, numerous senior centers and was volunteer of the year at the California Highway Patrol in Castro Valley.

She was preceded in death by her parents, Vernon and Armella Heilman; her brother David Heilman; her sister Lois Bryant and son Bryan Behling. She is survived by her daughter Paris Althouse and wife Diana Walker; son Keith Behling; sisters Annette Mayer and Jane Heilman; grandchildren Bryan Behling and wife Jakki Behling, Jennifer Weeks and husband Rob; great grandchildren Moriah, Nicholas, Jonathan and Mckenna Behling; and numerous nephews and nieces. She also made a new special friendship with Bob Elliott in Florida.

She will be laid to rest alongside of her brother David and mother Armella during a private service in Wisconsin.