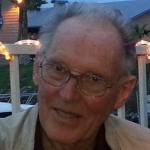 Gunderson was born in Saskatchewan, Canada and moved to Oakland, California in 1943.  He joined the U.S. Army in 1948 and served during the Korean War. He was hired at the Livermore Radiation Laboratory in Sep. 1959 as a sr. mechanical technician and worked his way up to become superintendent.  He worked on multiple projects throughout his career at the Lab and retired in 1987.