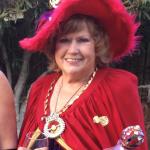 Watkins was born on Aug. 7, 1940 in Phoenix. She spent most of her early years growing up in San Francisco, attending Galileo High School. It was in the city where she met her husband of 44 years, Donald Watkins. She worked at Lawrence Livermore National Laboratory for more than 25 years. In her later years she started and was “queen mother” of two Red Hat Ladies groups in Sonora, then at Woodbridge.

In the spring she will be laid to rest with her husband Don at Saint Anne’s Cemetery in Columbia. The family is requesting in place of flowers, donations be made in her name to the Cystic Fibrosis Research Institute or Crohn’s & Colitis Foundation on behalf of her grandchildren.