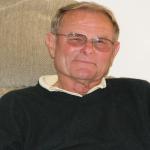 Klein was born in Waco, Texas on April 16, 1935, to Lucile and Vern Klein. Shortly after his birth, his family relocated to Livermore, California. He met his lifelong love, Carril, in grammar school, and they married in 1954 after graduating from Livermore High School in 1953.

He served in the U.S. Air Force, where he was an Airman First Class for the 322nd Fighter Interceptor Squadron in Moses Lake, Washington. After his military service, they returned to Livermore to start their family, and he began his career as a carpenter. He started work at Lawrence Livermore National Laboratory in 1963 and served as a carpenter, planner and construction coordinator until he retired in 1990. He was a master mason with the Mosaic Masonic Lodge #218 of Livermore.

In lieu of flowers, please send donations in his name to the Livermore Granada Boosters or the American Heart Association.

Callaghan Mortuary is honored to be serving the Klein family. An online guestbook is available for condolences at www.callaghanmortuary.com.