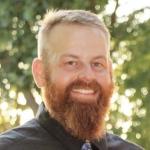 King was born in Modesto and graduated from Beyer High School in 1997. After high school graduation he pursued his professional ambition to become a machinist which he did for 25 years. He joined Lawrence Livermore National Laboratory where he was employed at the time of his death.