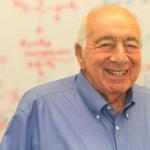 Berni Alder, known as the father of molecular dynamics, died Sept. 7. He was 94.

Alder was born in Germany, but was a Swiss citizen. In 1932, his family moved to Zurich, just before Hitler came to power. In 1941, when he was 16 years old, he fled Switzerland right before the United States entered World War II and took a sealed train through occupied France and then onto Spain and Portugal. There he boarded an American ship headed to the United States.

At the end of WWII, Alder finished his undergraduate work at the University of California, Berkeley in chemistry in 1946. He earned his master’s degree in chemical engineering in 1947 and joined the California Institute of Technology in 1948 as a grad student, where he met computer designer Stan Frankel. Using CalTech’s mechanical computers, Alder and Frankel developed a computer technique, now called the Monte Carlo method, for calculating results from random sampling.

Alder became a computational pioneer, who over six decades at Lawrence Livermore National Laboratory worked on computers to simulate the properties of materials.

After earning his doctorate, Alder started teaching as a lecturer at UC Berkeley. In 1953, he joined Lawrence Livermore as a consultant. He was working on the Monte Carlo method congruently with Edward Teller, so he came on as a consultant first and in 1955, LLNL offered him a job.

Alder invented molecular dynamics and helped develop Monte Carlo methods, which use computers to reproduce the behavior of atoms and molecules through a large number of random steps. His discovery includes changing kinetic molecular theory, showing that simulations can significantly affect a scientific field. In 1980, Alder was one of the pioneers who used large-scale simulations to solve quantum mechanics problems. More details about Alder’s life will appear in a future Newsline article.