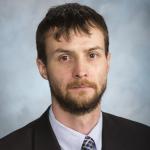 Mabe was born near Memphis, Tennessee, on Nov. 5, 1987, and graduated from the University of Tennessee, where he was a top collegiate scholar. After earning his bachelor’s degree in chemistry and his doctorate in nuclear chemistry, he came to the Lab in 2014 as a postdoctoral researcher, working on multiple projects involving development of new materials for radiation detection.

Despite his short career, Mabe authored five patents and recently started the commercialization process for production of large-scale 6Li-loaded plastics for antineutrino detection.

He worked as a tutor in mathematics and chemistry for high school and college students and was a volunteer with American Red Cross, Baptist Memorial Hospital Emergency Room and American Cancer Society Relay for Life. He also was an avid musician and played seven instruments, including guitar, drums and clarinet.

He is survived by his three children, Alina, Ada and Jessie; his mother and stepfather, Heather and Jon Garrett; three sisters, and many aunts, uncles and cousins.

Funeral services were held in Munford, Tennessee on June 26.