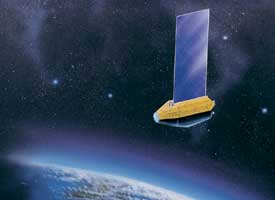 In March 1983, President Reagan unveiled a new vision of national security based on protecting lives rather than threatening them. This announcement kicked off the Strategic Defense Initiative—popularly known as Star Wars—that invigorated weapons work at Livermore. The Strategic Defense Initiative (SDI) included so-called third-generation, or nuclear directed-energy, weapons. Design teams began studies of the nuclear-powered x-ray laser as a candidate defense technology and explored the physics of such weapons in underground nuclear tests. The main focus of SDI, however, was on developing an effective nonnuclear defense, and two prominent efforts at Livermore were work on free-electron lasers and Brilliant Pebbles.

O Group, which was led by Lowell Wood and included many extremely talented young scientists, originated the Brilliant Pebbles concept, and the Strategic Defense Initiative Organization (SDIO) began funding Livermore for Brilliant Pebbles R&D in 1987. Brilliant Pebbles were to be small, lightweight spacecraft that could stop advanced ballistic missiles and their components in boost phase by colliding with them at high speeds. On command, a global constellation of these nonnuclear spacecraft could detect and destroy missiles without any external help. Because of the system’s attractive low-cost and survivability attributes, Brilliant Pebbles became a baseline system in SDIO’s Strategic Defense System Phase I Architecture in 1990. With the winding down of the Cold War, this architecture was scaled-back to become Global Protection Against Limited Strikes (GPALS) and still included Brilliant Pebbles.

In 1994, plans were further scaled back to theater missile defense only and work on Brilliant Pebbles was discontinued. However, before program cancellation, SDIO carried out the Clementine Deep Space Experiment, spectacularly demonstrating Brilliant Pebbles technologies. [See 1994 about Clementine mapping the Moon.]